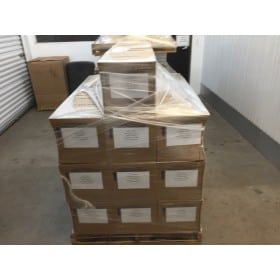 Be the first to rate BioTurf BioS+ Pallet 1 Gallon

Our most popular commercial grade product and the one that put us on the artificial turf cleaning and pet odor removal product map.  Custom enzymatic (BioS+) formulated to provide the most concentrated and penetrating effective odor elimination in artificial turf industry.  We have used and sold our product to thousands of homeowners who just love TurFresh.

Best for larger yards and Refill

Urine odor will give you a problem and your not alone. We all love our pets dearly but the urine smell in your house or backyard is driving you nuts! Pet urine odor is unmistakable, strong and extremely difficult to permanently remove. Dogs and all pets are sensitive creatures and sometimes the only way they can communicate with humans is through urine! BioTurf is the #1 recommended product for pet urine odor removal on almost all surfaces. In the past, pet urine odor were nearly impossible to eliminate. Now, with BioTurf you can permanently eliminate your pet’s urine odor and stains from virtually any surface.

BioTurf has been awarded with the BioS+ designation Bioaugmentation based Product. Our formula is a revolutionary biotechnology product that eliminates urine odor and stains at the source, permanently. BioTurf uses a combination of naturally occurring micro-organisms and their enzymes to digest the uric acid crystals (which produce urine’s pungent aroma) as well as urea (the sticky substance in urine) and proteins (which promote pathogen growth).

When it comes to removing pet urine odor and stains from artificial grass, concrete, carpet and rugs, BioTurf is head-and-shoulders above the rest.

Our most popular commercial grade product and the one that put us on the artificial turf cleaning and pet odor removal product map. Custom enzymatic (BioS+) formulated to provide the most concentrated and penetrating effective odor elimination in artificial turf industry. We have used and sold our product to thousands of homeowners who just love TurFresh.

How does TurFresh BioS+ Work?

Basically, bacteria are Nature’s way to degrade organic waste. Different strains of bacteria occur everywhere in nature and their function is to consume and degrade organic waste and break it down until the final byproduct is carbon dioxide and water. Most bacteria need a system pH from 5 to 8, a temperature of 50 to 90 degrees F., a food source (organic waste), and enough water or moisture to support bacterial life.

The bacteria will recognize the presence of different organic waste products in water then will swim over to the food and attach to it using a polysaccharide matrix (bio-film). Then they secrete the appropriate enzymes to break down the waste into microscopic particles that are fed to the bacteria.

The BioS+ bacteria consume organic wastes, grow in size, then duplicate themselves into identical bacteria cells, and continue to replicate to devour the waste completely and eventually degrade it. Under ideal conditions (controlled laboratory environment) a bacteria colony can duplicate in size every 20 minutes. These bacteria are self-regulating because they only stay on the food source until it is degraded. After the organic waste is gone they search for more or just hibernate until more waste is added to the waste water. The bacteria continue to consume and degrade the organic waste until it is depleted or more organic waste is added to the system. BioS+ Bacteria have a normal life cycle, like any other living organism, and are affected by changes in temperature, pH, the lack of oxygen, and any possible presence of chemicals, chlorine, quaternary ammonium sanitizing compounds, solvents, caustics, acids, or other similar products that could kill bacteria or inhibit their growth. “Spore forming” bacteria used in TurFresh BioS+ F Artificial Grass Disinfectant have the ability to encapsulate themselve in a hard shell and basically “go to sleep” if their environment is not able to support their growth. When the environment changes to support bacteria life and growth they wake up, recognize the presence of a food source, and continue to consume, degrade, live and die, in the waste treatment system. “Spore” type bacteria in waste containment systems or treatment systems have the ability to survive and function in the most severe environments.

Is TurFresh Safe? And Has It Been Tested?

There are no reviews yet.

We also recommend these great products

TurFresh is continuing to implement best practices for on-site safety and sanitation. We always use gloves and proper protective gear when cleaning your turf, and the products used are antibacterial. We also recognize the official recommendation of ‘social distancing’, and we want to reassure clients that we are fully capable of performing our turf cleaning services without any physical interaction with residents. All coordination and payment can be handled in a way that minimizes or entirely eliminates close physical contact with our employees in order to minimize any potential risk of transmission.